Venture capital investors like this approach, as it gives them a pretty good indication of what the market is willing to pay for a company. Basically, the market multiple approach values the company against recent acquisitions of similar companies in the market. 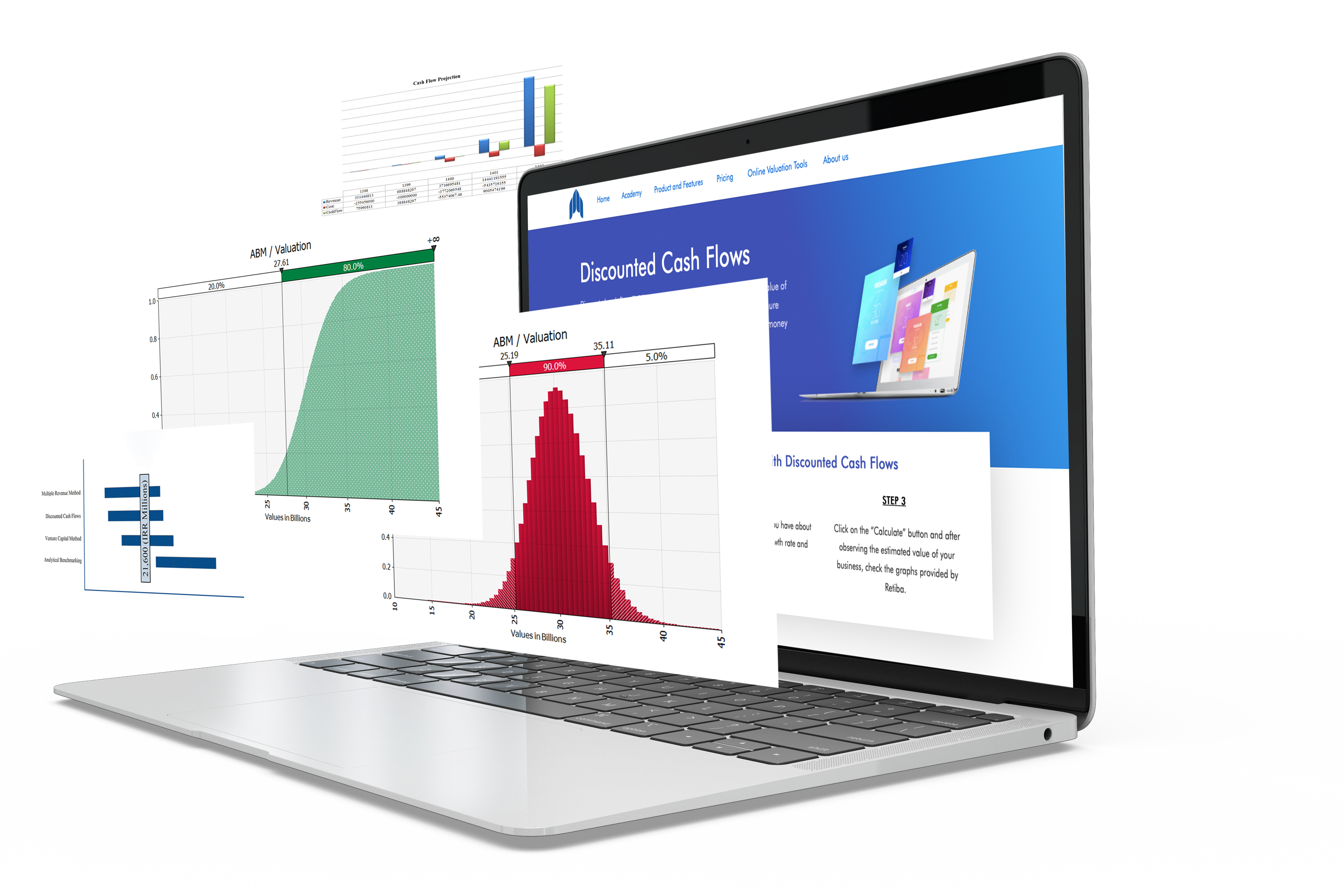 Import your historical financial numbers and your projection for 3 to 5 years later. Then, regarding to your market, import the tax rate for your business.

Based on the information you have about market, determine the discount rate, EV/R, EV/EBITDA and DLOM.

Click on the “Calculate” button and after observing the estimated value of your business, check the graphs provided by Retiba.

Multiples Method is another relative Method used to evaluate startups that have reached revenue generation and made profit.

Multiples Method is a simple and fast way to calculate the startup value. If the financial information of the listed companies in the stock exchange as well as the sales, income or profit information of the startup are available, it is possible to obtain the estimated value of the startup by multiplying these values. This method also shows that a startup will eventually achieve value near what its similar companies that are currently listed on the stock exchange. However, it should be noted that one of the weaknesses of this method is comparing companies with the assumption that they are similar. Active stock exchange companies have generally gone through the growth phase and reached a level of maturity in their business; therefore, the financial and operational structure of these companies is very different from a startup in the growth stage.

The approach of this method is similar to that mentioned in the Comparative Method, that is, by comparing the financial data of startups in similar domains, one can estimate the approximate value of the startup under consideration. In the comparative valuation method, you divide the value of the benchmarked startup in your field of ​​activity by one of the key performance indicators that you have its data, then multiply the result by the corresponding key performance indicator in the startup under study and gain the startup value. In the Multiples Method, the valuation approach is almost the same. In fact, in the Multiples Method, instead of putting the number of a key performance indicator, you should use a financial index related to that business such as EBITDA.
Another difference between the Comparative Method and Multiples Method is that the disclosed financial data of the listed companies in the stock exchange can be used in Multiples Method. Taking a glance at the stock exchange site, it can be seen that the financial information of many businesses in different fields is presented in a transparent manner such as: market value or market cap of the company, number of shares, value per share, EPS and P / E ratio, etc. In sum, it can be said that Multiples Method works in such a way that a number of listed companies whose field of activity is very similar to the field of startup under study, their financial ratios such as EV/R Or EV /EBITDA are calculated, and the value of the parameter in the denominator of this ratio for the startup under review is multiplied by this ratio and the startup value is estimated. Sometimes, the data of the previous year is used, sometimes to provide the valuation results tendency toward the future of the business, the forecasted data of the startup are used; accordingly, at the desired discount rate, the obtained numbers are discounted and the current value of the startup is calculated with the help of future data. Additionally, Multiples Method applies a coefficient called DLOM in the end which startup gives to the investor due to the low liquidity of the capital that the venture capitalist has injected into the startup valuation calculations.

It should be noted that in the process of startup valuation, it is not sufficient to reach a definite number as a result of valuation, and you as a valuator should be able to calculate the effect of different parameters on the valuation result.